The Anti-Racial Profiling Project offers resources and legal referrals for those impacted by the U.S. government’s increased efforts to target and profile Asian American and Asian immigrant scientists and researchers, particularly of Chinese descent. As part of our educational awareness efforts, we work with partners to make sure people know their rights. The Anti-Racial Profiling Project also engages in policy analysis, coalition building and public education around these and related profiling issues for policymakers, the media and the general public. 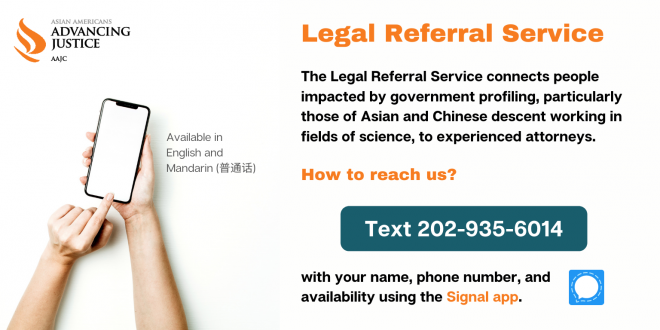 Asian Americans Advancing Justice | AAJC is deeply concerned with the racial profiling and unjust prosecutions of Asian Americans and Asian immigrants, particularly those of Chinese descent. Unfortunately, this country has a long history of criminalizing immigrants and treating Asian Americans as “perpetual foreigners” and spies disloyal to the United States. In recent decades, we have witnessed too many troubling incidents of Asian American scientists who have been interrogated and charged with a crime only to have the charges later dropped, often ruining careers and leaving lives in shambles.

Legitimate concerns of espionage and unfair trade practices by the Chinese government in recent years, the pressure on federal agencies to prosecute these cases, combined with scapegoating and racist rhetoric by officials at the highest levels of government have driven a sharp rise in the profiling and targeting of Asian American and Asian immigrant scientists and researchers, particularly those of Chinese descent. Agencies such as the FBI and the National Institute of Health have sent mass communications to academic institutions implicitly encouraging staff to treat Asian American scientists and researchers as suspects.

Federal prosecutors are also charging many Asian Americans and Asian immigrants with federal crimes based on administrative errors or minor offenses such as failing to disclose information and other activities that are not illegal under the pretext of combating economic espionage. As a result, many people who have not engaged in criminal wrongdoing or espionage have been ensnared by overzealous prosecutions based on racial bias against Asian Americans.

The mass profiling of Asian Americans harms the lives of not just individuals, their families and communities, but erodes the health of our democracy. In response to increased concern and fear raised by community members and partner organizations, several people, including Frank Wu, president of Queens College, in his individual capacity, have worked together to co-found the Anti-Racial Profiling Project at Advancing Justice | AAJC.

The legal referral service is available to connect people impacted by the government’s targeting and profiling of Asian Americans and immigrants, particularly those of Chinese descent working in fields of science, to attorneys.  Staff are available to speak and text in English or Mandarin Chinese. The Anti-Racial Profiling Project does not provide legal advice or direct representation on individual cases.

If you believe you are being targeted and profiled based on your ethnicity, you may contact 202-935-6014 using the Signal app and a staff member from Advancing Justice | AAJC will reach out to you directly.

If you are having trouble with using Signal, please text ONLY your name and phone number to 202-935-6014 and a staff member from Advancing Justice | AAJC will contact you directly.

Why do we use Signal?

We use Signal to protect your privacy. Signal is an encrypted messaging app designed to never collect or store any sensitive information. Signal messages and calls cannot be accessed by Signal or other third parties because they are always end-to-end encrypted, private, and secure. The app is free to download and use.

Know Your Rights information on enforcement at the airport available here.

Learn more about the government's targeting of Asian American and immigrant scientists in the video produced by SupChina: Scientists in the crosshairs: How to avoid getting snared in the U.S. crackdown on ‘China Ties’

Watch our webinars & press briefings below:

Federal Grant Applications in the Era of the "China Initiative:" How to Avoid Trouble webinar available here.

Your contribution will enable us to offer resources and legal referrals for those impacted by the U.S. government’s increased efforts to target and profile Chinese scientists and researchers. Donate here. We appreciate your support!