As part of our educational awareness efforts, we work with partners to make sure people know their rights. Advancing Justice | AAJC spearheaded coalition efforts that led to the Department of Justice’s announcement to end the “China Initiative,” and continue to work towards advancing long-term efforts to end racial bias and discrimination against Asian Americans and immigrants. 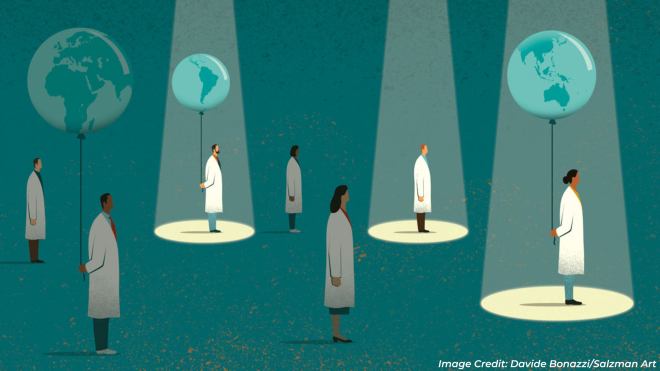 As far back as during World War II, Asian Americans have been treated with suspicion. More than 120,000 U.S. residents of Japanese ancestry were rounded up, forced to leave their homes, and incarcerated in remote detention camps in the name of “national security” in what was one of the darkest stains in our nation’s history. Thousands of American babies were born in detention as human beings were placed behind barbed wires and reduced to numbers on tags. About 2,000 people died in incarceration from a series of causes including infectious diseases, bad sanitation, or even shooting by guards. The racist rationale behind this measure was concern that any people of Japanese descent were more prone to acts of espionage or sabotage.

Unfortunately, history continues to repeat itself. Following 9/11, we saw Arab, Middle Eastern, Muslim, and South Asian (AMEMSA) communities subjected to mass surveillance, unwarranted investigations, and unjust prosecutions by the federal government under counterterrorism and surveillance programs, such as Countering Violent Extremism (CVE) programs and the National Security Entry-Exit Registration System (NSEERS). As with the incarceration of Japanese Americans, racist rationales were used to justify the government’s actions — for example, the discriminatory theory of “radicalization,” which falsely claims that people with certain religious beliefs and practices are more prone to actions threatening national security.

In the past decade, we have continued to see federal agencies use race, ethnicity, national origin, and/or religious beliefs to profile and target Asian Americans, particularly Chinese American scientists and academics, including Gang Chen, Anming Hu, Wei Su, Xiaoxing Xi, Sherry Chen, and Wen Ho Lee. Racial bias against persons of Asian descent permeated federal agencies and influenced the investigations and prosecutions of Asian Americans and immigrants across the country. This discrimination intensified under the Justice Department’s now-defunct “China Initiative,” allegedly intended to combat economic espionage and trade secret theft. Under this initiative, officials have relied on a broad theory of “non-traditional collectors” — a euphemism for “spies” — to broadly scrutinize individuals of Chinese descent.

While there are legitimate concerns about the activities of the People’s Republic of China (PRC) government, the increasing pressure on the FBI and Justice Department to bring cases, along with rising xenophobic and anti-China rhetoric from U.S. government officials, have further fueled anti-Asian sentiments at home and instigated a new wave of racial profiling and violent targeting of our communities.