Civil Rights and Security at Border and Ports of Entry

Advancing Justice | AAJC fights laws and policies that target immigrants based on their race, ethnicity, religion, or ancestry at the border and ports of entry. From the Trump administration’s cruel Muslim Ban, which separated families through bans on certain visa categories to the treatment of immigrant communities at the border and ports of entry, we continue to face ongoing affronts against our civil rights. 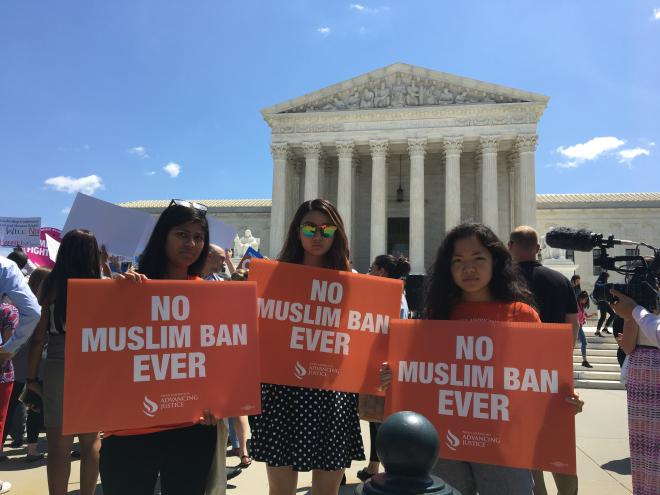 The Muslim Ban greatly impacted communities. This ban impacted not only foreign nationals, but families, U.S. citizens and lawful permanent residents (LPRs). Family members of U.S. citizens and LPRs seeking immigrant visas from these affected countries were not unable to do so. Those seeking non-immigrant visas to visit the U.S. for life-saving medical treatment were barred simply because of their country of origin. Foreign nationals of impacted countries were unable to come to the U.S. for tourist visas and contribute to our national economy. They were unable to come visit to attend special occasions such as graduations, weddings, and funerals. This ban separated families and disproportionality impacted Muslim communities.

After litigation blocked the original versions of the Muslim Ban, on June 26, 2018 the U.S. Supreme Court ultimately ruled in a 5-4 decision that the Muslim Ban did not violate the First Amendment or exceed the President’s authority under the INA. On January 31, 2020, President Trump expanded the Muslim Ban by adding six more nations to the list of countries that have visa restrictions. The expanded ban added Sudan, Nigeria, Tanzania, Burma (Myanmar), Eritrea, and Kyrgyzstan and bans some or all immigrant visas (green cards) from being issued to nationals of these states. This expansion came just four days after the anniversary of the first Muslim Ban expanding its impact to an additional 773 million foreign nationals.

President Biden rescinded this ban when he came into office. However, there continues to be the serious concern that future administrations would have the authority to enact similar discriminatory bans. Moreover, families continued to be impacted, unable to receive visas. In August 2022, a federal judge ordered the Biden administration to create a new process for those denied visa waivers as a result of the Muslim and African Bans.

Advancing Justice | AAJC continues to monitor the treatment of immigrant communities at the border and ports of entry, including the differential treatment of Muslim and Sikh communities based on their religion. We founded and are co-chairing the Immigration Hub’s Anti-Profiling Working Group to improve solidarity work and increase community capacity in researching and combating profiling of border immigrant communities