The overwhelming majority of the Asian American and Pacific Islander (AAPI) population are immigrants or the children of immigrants. The AAPI community has the highest proportion of immigrants of any other racial and ethnic groups in the U.S. Approximately two-thirds of Asian Americans and one-sixth of Pacific Islanders were born outside of the United States. As a predominantly immigrant population, AAPI perspectives are critical to ensuring the policymakers and the public have an accurate understanding of immigration issues. Immigration has always been and continues to be a significant, current, life-affecting issue for AAPIs across the country, particularly as more immigrants enter the U.S. from Asia than from any other region in the world. 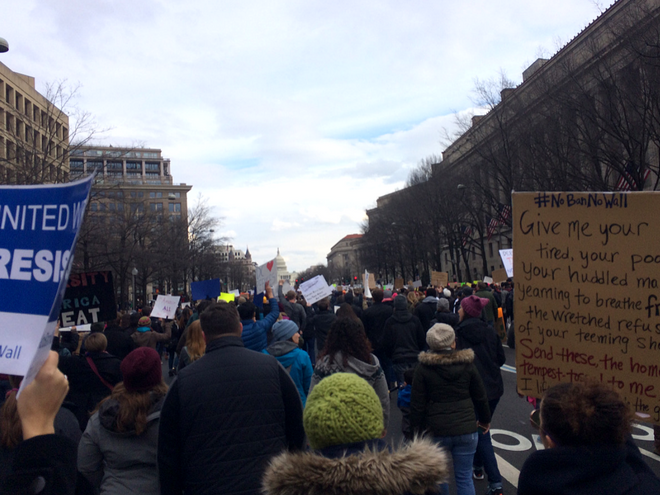 Families are the cornerstone of American communities and help our country thrive. Since the Immigration and Nationality Act of 1965 (INA) ended the previous racist national origin quotas heavily favoring immigrants from Northern and Western Europe, our immigration system has prioritized family reunification and maintaining diversity. As a result, many new immigrants were able to put down roots in the United States regardless of their wealth, race or religion.

Family unity is a valued tradition and the foundation of America’s immigration system, adding to the nation’s economy and strengthening families and communities. Together family members help their new immigrant relatives settle into their lives in the United States. Their immigrant family members then go on to start businesses, care for our most vulnerable, strengthen our economy and become citizens. They step in to provide support in times of personal and economic hardship. Caretakers, who are predominantly women often do unpaid and undervalued work that enable their family members to work outside the home, contributing to our economy. Today, the vast majority of immigrants coming to the U.S. through the family-based system are people of color, forming the backbone of our rich, vibrant and multicultural American communities.

Despite the importance of family unity as a fundamental American value, families continue to be separated as a result of an outdated immigration system and visa backlogs. There are nearly 3.7 million aspiring immigrants waiting for family preference visas, and more than 40% of the people stuck in the family backlogs are from Asia. Moreover, the Trump administration is proposing to break up families through deportations or by ending family-based immigration all together.

The Advancing Justice affiliation co-convened the Value Our Families Campaign with partners to build public support for an immigration system that protects and promotes family unity and contributes to the American social and economic fabric. The Value Our Families Campaign is a network of local and national community-based and advocacy organizations who reject attacks and proposed harmful changes to our current family-based immigration system.

In addition to defending against harmful rhetoric and policy changes, Value Our Families has pushed for positive solutions such as Representative Judy Chu’s (D-CA) Reuniting Families Act, which would reduce family immigration backlogs and promote the humane and timely reunification of immigrant families.

On February 24, 2020, the U.S. Department of Homeland Security’s (DHS) final public charge rule went into effect nationwide. In a public statement, Asian Americans Advancing Justice | AAJC condemned this policy which seeks to dramatically undermine the family-based immigration system that has been the backbone of our country and instead prioritizes wealthy and white immigrants. Advancing Justice | AAJC continues to oppose the new rule and educate community members about it. The rule is essentially a wealth test and  a backdoor method to attack family-based immigration by making it harder for people to gain lawful permanent residence and seeks to scare immigrants away from using vital healthcare and other services.

On January 31, 2020, President Trump expanded the Muslim Ban by adding six more nations to the list of countries that have visa restrictions. The expanded ban added Sudan, Nigeria, Tanzania, Burma (Myanmar), Eritrea, and Kyrgyzstan and bans some or all immigrant visas (green cards) from being issued to nationals of these states. This expansion came just four days after the anniversary of the first Muslim Ban. Following this expansion, the ban will now impact an additional 773 million foreign nationals. For information on the particular harmful impacts of this ban on Burmese and Rohingya Americans and refugees, read our blog post.

After litigation blocked the original versions of the Muslim Ban, on June 26, 2018 the U.S. Supreme Court ultimately ruled in a 5-4 decision that the Muslim Ban did not violate the First Amendment or exceed the President’s authority under the INA.  Advancing Justice | AAJC supports the National Origin-Based Antidiscrimination for Nonimmigrants Act, or the “NO BAN Act”  introduced by Senator Chris Coons (D-DE) and Representative Judy Chu (D-CA) on April 10, 2019. The bill would repeal all iterations of the Muslim Ban including the recently expanded Muslim Ban and the Refugee and Asylum Bans and further prevent the issuance of similar bans in the future that target immigrants based on religion or national origin.

People with questions about travel should read the factsheets below and speak to an attorney or Bureau of Immigration Appeals (BIA) accredited representative.

Read our blog post for more information on the Expanded Muslim Ban and the NO BAN Act.

Heightened enforcement has greatly impacted Southeast Asian Americans and other long-time residents and refugees. For many Southeast Asian refugees, an old or minor conviction made in their youth means exile from the only country they know. After fleeing genocide and war as children, they sought refuge in the U.S., only to be resettled in poor urban areas without adequate resources. Faced with economic insecurity and over-policing, many Southeast Asian teenagers made mistakes and found themselves funneled into a school to deportation pipeline. Southeast Asian immigrants are three to four times more likely to be deported for old criminal convictions compared to any other immigrant group. From 2017 to 2018 alone, the Cambodian American refugee community suffered a 279% increase in deportations. Arrests of immigrants from Vietnam, Laos, and Cambodia alone constituted nearly 3,000 arrests, about 20% of the total number of Asian immigrants arrested during that period. As a result, thousands live in fear of deportation, stuck in a paralyzing limbo that ripples through their families and communities. Advancing Justice | AAJC supports the New Way Forward Act, legislation that would reform cruel immigration laws that result in mass incarceration and deportations of long-time lawful permanent residents and restore dignity to our immigrant communities. Read our blog post for more information on the New Way Forward Act and the deportation of Southeast Asian Americans and other long-time residents and refugees.

For too long Congress has funded a bloated, unnecessary and inhumane immigration enforcement regime that contributes to mass incarceration of immigrants and separates millions of families. Asian Americans Advancing Justice is a member of the Defund Hate Campaign and works to educate Congress and the public about the need to defund immigration enforcement agents, detention beds and prevent the construction of a border wall.

Please see our written statement to the House Judiciary’s Subcommittee on Immigration and Citizenship for more information on ICE’s expansion and inhumane use of detention centers.

Moreover, we have seen ways in which new methods and technologies have been used for immigration vetting purposes such as the monitoring of social media accounts of immigrants and nonimmigrants seeking to enter the United States raising concerns related to privacy, online expression, and the impact on our communities. For more information regarding our concerns with social media surveillance and the impact on our immigrant communities, please see our resource page.

Americans Advancing Justice | AAJC is a founding member of the AAPI Immigrant Rights Organizing Table founded to push Congress to pass a clean DREAM Act and defend the DACA program, which the administration announced it intended to terminate on September 5, 2017. Through the table we have organized multiple events to fly-in undocumented youth and other community leaders to advocate directly for a permanent legislative solution for undocumented youth.

TPS, is a humanitarian form of immigration status intended to protect foreign nationals in the United States from being returned to their home country if it becomes unsafe during the time they are in the U.S. and returning would put them “at risk of violence, disease, or death.” Under this administration, TPS recipients have been at risk of losing their status.

What's your immigration story?
Did you come to the U.S. to work? To study? To provide a better life for your family? We want to hear about it.
Share Your Story

Making the Case
We use legal advocacy to influence key civil rights issues that have significant impact on Asian Americans, Pacific Islanders, and immigrant communities. Support our litigation campaign.
Donate