Voices of Democracy: Asian Americans and Language Access During the 2012 Elections

We examined national trends in language assistance and other voting problems, section 203 implementation, and discuss best practices and recommendations. 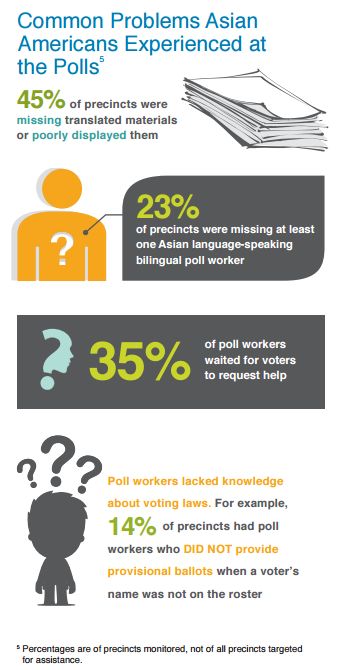 Voting, a fundamental right guaranteed to American citizens, is one of the foundations of our society. It is an important tool we have to influence government policies that affect every aspect of our lives—from taxes, to education, to health care. Voting creates change and holds the government accountable to its people. Voting is power.

Some Americans, however, have more difficulty exercising the franchise than others. For anyone not fluent in English, including those recently naturalized, this can be a serious barrier to voting. Voting can be a complicated process for even native-English speakers, so one can imagine how hard it is for those who cannot understand the variety of forms, instructions and procedures necessary to register and cast a ballot.

The Voting Rights Act, specifically Section 203, aims to remove the language barrier. Enacted by Congress in 1975, Section 203 requires certain jurisdictions to provide assistance to language-minority voters. Language assistance includes translated materials, such as ballots and registration forms, access to multilingual workers/volunteers at polling sites and publicity of the availability of these resources.