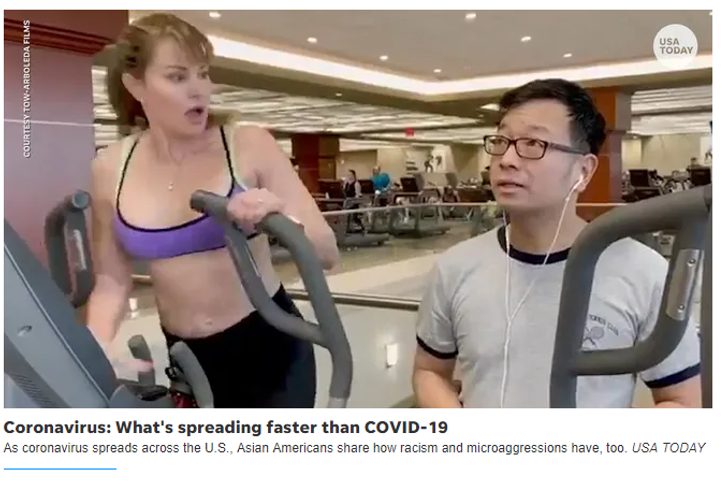 WASHINGTON – The House passed a measure Thursday condemning anti-Asian bigotry and discrimination during the COVID-19 pandemic.

Rep. Grace Meng, D-N.Y., the sponsor of the measure, told USA TODAY its passage would be “really important” to demonstrate to the Asian American community that it's “wrong to discriminate against our community in light of the pandemic.”

“We're glad that the House is taking a very strong and public stance against the discrimination and the violence that is happening during this public health crisis,” she said.

Amid inflammatory political rhetoric blaming China for the pandemic from President Donald Trump and his allies, increased numbers of Asian Americans have reported harassment and even physical assaults.

The resolution – the House’s first addressing anti-Asian discrimination related to the pandemic – passed by a 243-164 vote. All Democrats were joined by 14 Republicans in voting for the measure. Meng, its sponsor, voted by proxy.

"The House needed to take a strong and public stand against this appalling intolerance, discrimination, and violence that has taken place all across the country during this public health crisis, and today it did just that," Meng said in a statement following the vote.

It does not refer to any individual’s rhetoric  and instead “calls on all public officials to condemn and denounce any and all anti-Asian sentiment in any form.” It also asks for federal law enforcement to work with state and local officials to address reports of hate incidents and crimes against Asian American communities as well as collect data on the incidents.

Health experts at the World Health Organization and Centers for Disease Control have said linking diseases to a specific location or ethnicity could perpetuate stigma and have urged the use of other terms to describe the virus.

The 2020 Asian American Voter Survey released Tuesday found that 51% of Asian Americans were concerned about experiencing hate crimes, harassment, and discrimination because of COVID-19, and a combined 79% said there was a lot or some discrimination against Asian people in society.

University of Maryland Professor of American Studies Janelle Wong, the co-author of several books on Asian American politics, told USA TODAY the polling showed how Asian Americans were "still vulnerable to anti-Asian bias and racism" despite gains in income and education.

Trump appeared to back away from his previous rhetoric about the virus in March, writing in a tweet it was “very important to totally protect our Asian American community” after facing fierce criticism from Asian American and public health advocates, but has since returned to referring to the coronavirus as the “China virus” amid heightened tensions with China.

The House measure, a nonbinding resolution, does not require the Senate to pass it, nor does it require the president’s signature.

Meng said she hoped the measure would pass with bipartisan support and should not be controversial, but a large number of House Republicans opposed the measure. House Minority Whip Steve Scalise, R-La., the second-ranking House Republican, tweeted Tuesday Democrats were “wasting their time with the measure” and would be effectively condemning their past references to the coronavirus by its location of origin. “These people aren’t serious,” he wrote.

Asked about Scalise’s objections, Meng said “this is not a waste of time. People's lives are at stake.”

“It is something that is important, symbolic, and should be easy to stand up in defense of the Asian American community and to denounce violence,” she said.

Speaking on the House floor, Republicans said Democrats were trying to score political points against the president with their resolution.

Rep. Jim Jordan, R-Ohio, called it “just another Democrat attack on the president,” and House Minority Leader Kevin McCarthy, R-Calif., called it a waste of time when the House could be working on COVID-19 relief. "There is no kitchen in America that thinks this is a priority," he said.

Democrats said Republicans were more concerned about defending the president than voting to condemn hate.

"I was so dismayed to see my Republican colleagues, one after the other, come to the floor today and tell the Asian American community that their suffering does not matter, and that they are indifferent to the consequences of the hate they are spreading," said Rep. Judy Chu, D-Calif., the chairwoman of the Congressional Asian Pacific American Caucus.

House Speaker Nancy Pelosi, D-Calif., said the legislation would shine "a bright light on the injustice experienced by so many, including the surge of violence and discrimination being experienced by Asian American and Pacific Islander community."

Many Asian Americans were "fighting on the front lines against COVID-19" but "instead of being celebrated as heroes, they are fighting violence and bigotry," she said.

Advocates hailed the passage of the measure.

Gregg Orton, the national director of the National Council of Asian Pacific Americans, a coalition of over 35 national Asian American advocacy organizations, said the vote would be a “rejection” of both “COVID-19-fueled racism” and of Asian Americans’ fears their concerns would be ignored.

Even though it was a symbolic vote, “we shouldn’t discount the importance of the U.S. House of Representatives, as an institution, taking a stand on this, “ he said.

The country risked being on a “dangerous path where this behavior can become normalized if we do not put a stop to it now,” said John C. Yang, the president and executive director of Asian American advocacy group Advancing Justice-AAJC.

His group, which has been tracking and reporting hate incidents, said they applauded the measure and “those Congressional members who are actively trying to stop the harmful rhetoric that fans the flames of these xenophobic attacks.”

The Leadership Conference on Human Rights, a coalition of civil rights organizations, hailed the passage of the resolution. "We must unite against racism & bigotry," the organization wrote on Twitter.

And the Asian Pacific American Institute for Congressional Studies, a nonprofit promoting Asian American political representation, wrote, "today, #Congress sends a message to the American people that racism, bigotry & xenophobia will not be tolerated."